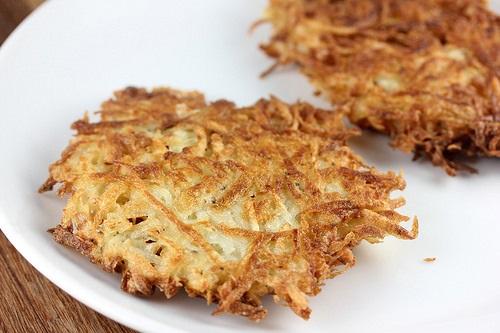 To many, hash browns are a rare treat that you can only get somewhere else for brunch. They are really delicious, but for some reason when we plan our home menus, we either forget about them or think they are just too much trouble to make.

If you’re like me and enjoy making and eating homemade hash browns, you already know that they are very easy to make. They are so tasty you’ll never believe something so delicious could be done so quickly at home. In the article below, I’ll share you my little tips for cooking perfect homemade hash browns that don’t require any skill or effort to make.

Waxy potatoes are usually used for the Swiss rosti, but all-purpose potatoes are better for hash browns. Waxy varieties are harder to find in many countries, so it’s more practical to get floury potatoes. However, I saw many chefs who prefer waxy potatoes, so you can experiment with different types to find your favorite ones.

I’ve experimented with different potatoes and found that waxy ones keep their shape much better, which makes hash browns more like a rosti, with individual pieces standing separately. If you take floury potatoes, they will mould into each other and create hash browns that are crunchy on the outside and creamy inside. I prefer the second option, especially when you pair hash browns with eggs. For the ideas, check out this recipe.

I usually use cooked potatoes to save time and steer clear of rosti dishes, but professional chefs prefer using raw. Just like rosti, using raw potatoes make your hash browns soggy because you won’t fry potatoes, you will steam them. Of course, your hash browns will still be delicious, just a bit wet and less crunchy. I personally love a good crunch, so it’s a must-have for my hash browns. Feel free to stick to a more traditional version.

If you check old recipes from old cooking books, you won’t find any instructions on how the potatoes should be cooked. Hash browns were designed to use leftovers, but then people started boiling them to tenderness or until you can poke a skewer through potatoes. If you have leftovers, don’t shy away from using them because the flavor is delicious and you don’t lose any texture. If you cook potatoes, let them cool and dry before preparing your hash browns. If you add them directly on the pan, they will stay a bit wet.

How to cut potatoes

Some people grate potatoes, others dice them in chunks, and if you check old cook books, most of them recommend chopping the potatoes. Basically, there is no wrong way to cut them, and here is what I found after experimenting with potatoes.

The grated potatoes are a lot like rosti and I don’t really like that, and the chunks are too big for regular hash browns. I like to have my hash browns like a potato cake rather than huge bits scattered on a plate. It seems that a traditional way of chopping potatoes in small cubes is the best for me because potatoes stay creamy and soft inside and crunchy on the outside. You can gently press the potatoes with a spatula while frying them to bring the potatoes together in a solid mass.

Older recipes don’t mention potato skin, and not many chefs recommend using them. I think you can just leave them on if you’re not using thick-skinned potatoes or leftovers. Potato skins add more flavors to the dish and become very crispy. As always, you can experiment with recipes to find your perfect hash browns. This recipe can be a good start.

Some chefs use vegetable oil for frying has browns, but I don’t really get this: vegetable oil has no flavor and just adds more fat. I’ve seen some people use duck fat which is very delicious and has a great flavor, but it can be a little bit too much for some people. Duck fat can be a good option when you’re making hash browns for dinner, but not for breakfast. Some chefs use bacon fat, which adds savory flavor; it’s just delicious. If you like smoky dishes, but you don’t have any bacon on hand, you can use salted butter.

If you use butter, make sure not to spoil your hash browns with burnt butter. You should carefully control the frying temperature. My suggestion is to use bacon or avoid any oils and fats, hash browns are delicious as is.

How to fry hash browns

Most of us fry our hash browns, so you don’t want to keep the heat low or you will be steaming your potatoes. Some chefs bake their hash browns, which results in a crispy top and bottom and soft mixture inside. If you like your hash browns to be like an omelet, I suggest baking the potatoes. It’s a healthier alternative that is very delicious. I personally like frying the potatoes more because I need buttery texture in my hash browns.

Many people add onions to hash browns and I think that sweet flavor is a great addition to savory and creamy potatoes. However, you should properly cook them before you add the potatoes to the pan so that everything is caramelized and crispy and not burnt. Raw onions have a strong flavor, so I never add it raw to my hash browns.

Some people add cayenne pepper but it’s not my taste since I like my hash browns at breakfast and they should be buttery calm, not spicy. I saw recipes with parsley that brings bright color, but I don’t think it adds any flavor.

I was surprised to see that some chefs add dairy products to their potatoes. For example, they mix milk to cooked potatoes before frying which basically means frying mashed potatoes. I even saw people adding double creams over the top of their hash browns, which made them gloopy. If you use bacon, duck or bacon fat to add richness to your hash browns, dairy is unnecessary. I usually make my dish without milk or cream and it’s delicious. You should season the potatoes before you portion them or they can be bland. Seasoning the finished dish is fine too, but flavors blend better if you do it before frying.